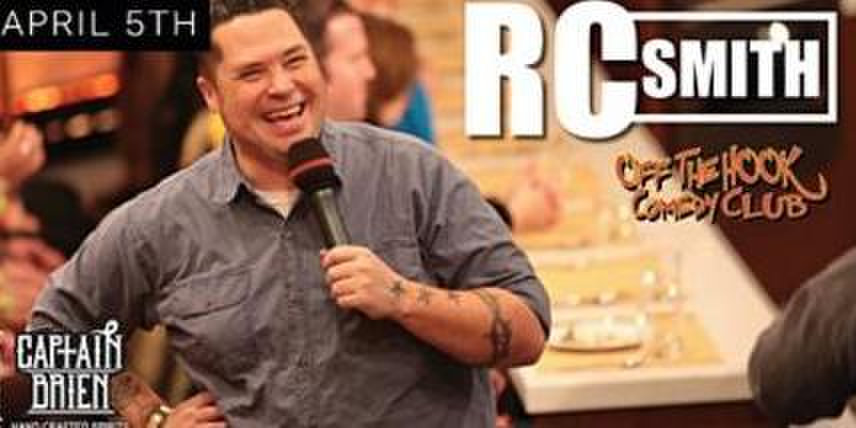 OFF THE HOOK COMEDY CLUB

RC Smith is known in the television and comedy industry as one of the best “tv warm-up” guys in the business. A warm-up comic’s job is to get people who are there to see a television show

RC Smith is known in the television and comedy industry as one of the best “tv warm-up” guys in the business. A warm-up comic’s job is to get people who are there to see a television program show, in a great, upbeat mood, before they see the show. A great warm-up comic can jump-start an audience from nothing to something and has to do it right from the start. He has to have great energy as soon as he hits the stage and he has to be a 100% hitter. RC SMITH IS THAT GUY!
RC is more than ready to be in the front of the camera. His talents are immeasurable as a seasoned headlining stand-up who has the reputation as being one of the greatest “crowd work” guys in the comedy business. RC possesses a unique ability to work with an audience. His style is rapid-fire, relentless, and non-stop. And, he gets away with it because his Midwestern roots make him so darn likeable. His improvisational styling’s look like the material is made up on the spot, even though a lot of it is true and tested. He’s just so good at it........it looks truly improvisational. RC headlines all around the country and Canada and is a regular on a handful of 50,000 watt radio stations which is a true testament to his adaptability, likeability, and creativity.
RC just completed his seventh season as the warm-up comic for TV’s “The Chew” and has frequently filled in at “Good Morning America” this year. RC has done additional warm-up for The Late Show with Stephen Colbert, Ryan Seacrest’s “Million Second Quiz”, Neil Patrick Harris’ Best Time Ever, and that was after a seven season run doing warm-up for the “The Rachael Ray Show”. RC has also done warm- up for TV’S “The Colbert Report”, The Tony Danza Show”, “Who Wants to be a Millionaire”, “The Caroline Rhea Show” and “Ricki Lake”. Not only does RC jump-start a live st